If the Earth would break apart, how likely would the large debris stay in orbit?

In the story I'm writing, Earth gets destroyed and the few million humans that survive go to live on another Earth-like planet.

Since the destruction of the planet, the humans do visit their star system every generation as part of their history and as a memorial to visit where their former home world would be. Almost every human knows about what happened and no one wants to forget the mass of lives that were lost.

What destroys Earth is an alien weapon, like a bomb, that is powerful enough to break into the crust and bury itself into the mantle before it detonates. Designed to warp the gravitic and magnetic fields outward, it causes the crust to crack along the tectonic plates, causing the side it impacted to effectively break away, leaving at least one large plate intact but with an exposed mantle and core (looking a lot like the image below)

I don't know if the planet's remains would still be there. I've seen plenty of things, like bits and pieces in fiction and films where planets remain in orbit like: 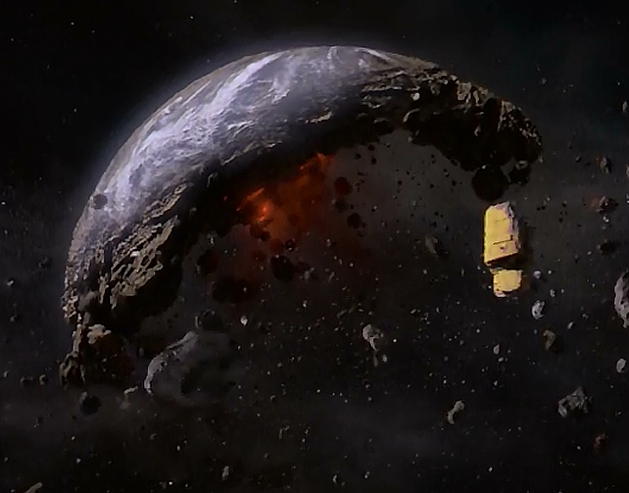 I know that there might be a greater chance that the debris might be pulled back into its mass again but there's also the suggestion that the remains would float off into space since there might not be enough gravity to hold it in orbit or the force of the detonation might send things in all directions.

What I want to know is: how likely are the remains to stay in orbit of the Sun for future humans to visit?

SKKennell‭
1 reputation 2 0 0 0
Permalink History
Why does this post require moderator attention?
You might want to add some details to your flag.
Why should this post be closed?